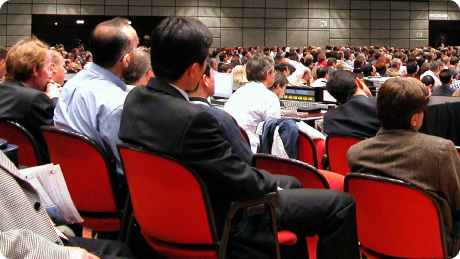 Audience response systems not only gage audience perceptions or determine understanding of a concept, but they even have the capability to assist in the execution of elections.  This provides for a more efficient voting system.  Ballots are still able to be cast anonymously.  Additionally, there is no time wasted by the physical collection of the ballots and tabulation of the votes for each candidate.  The votes are tabulated as soon as participants enter their votes and results are generated within seconds of submission so that users have the ability to conduct more business in a single meeting with a higher quality of productivity.  With delegate voting through audience response systems, there is no need to worry about lost or misplaced ballots.  There is also no cause for concern when it comes to the calculation or miscalculation of votes.  The software collects, stores, and analyzes the ballots; therefore, human error is not an issue in these cases.  This also prevents rigged elections by “stuffing” the ballot box or voting multiple times.

Option Technologies provides an add-on, the Delegate Voting Module, for their audience response system software to carry out these functions while maintaining access to all of OptionPower’s standard audience response features to keep attendees engaged.  The system defaults to anonymous voting mode.  However, there is a recorded vote option to track the roster for situations that may require voting records.  The add-on allows the user to easily export the voting data as an easy-to-use file for Microsoft Excel in order to make record keeping and reporting as simple as possible.  With the Delegate Voting Module, there is no need to worry about last minute entries or drop-outs.  The module supports flexible ballots.  They may be altered as easily and as quickly as altering any PowerPoint slide.  This allows the client to alter the candidate selections at any time.  The voting ballots are on-screen; this means that they are projected like a PowerPoint presentation onto a screen for every audience member to view simultaneously.  Projecting the ballots eliminates the cost of printing and creating ballots.  It also removes the hassle of distributing the ballots and collecting them by hand, saving a significant amount of time particularly for a large voting population.  The module even permits the user to determine winners for multi-candidate offices.  It will show the candidates earning the most votes and will immediately reveal if a tie has occurred or if another condition may have arisen that may require special action or attention.  The results are immediate and even accurate regardless of whether there may be thousands of voters.  The module for the audience response system is capable of audit trials to ensure that all of the records are valid and kept secure by keeping a log of who has accessed files and what actions were performed in each file.  Each attribute of the Delegate Voting Module has been designed to optimize this type of voting with an audience response system and to be simple to use on the part of the presenters and the participants to ensure that the voting process as easy as possible.

Option Technologies seeks to assist those that implement the system cut down their voting time by 70 percent and even up to 80 percent.  The Sinsinawa Dominicans, sisters of a faith-based community, have used the Delegate Voting Module in order to elect their team leaders and decide upon actions for other important issue.  The sisters estimated that the system saved them about twelve hours of meeting time.  The Delta Gamma sorority has enacted the system for new member selections.  Their voting time was cut by over 50 percent.  Many other organizations have utilized the system with similar results.  The amount of time and money saved makes this module, along with an audience response system, a must-try for any organization.

Learn something? Share it so others can benefit too!

How Can We Help?

Give Us A Call Today!