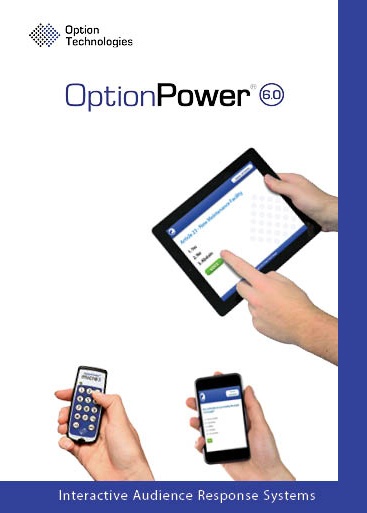 Option Technologies International a leading provider of audience response systems, has announced the release of OptionPower 6.0, an upgrade to their flagship OptionPower software application that adds polls, surveys, electronic voting and other interactive functions to PowerPoint presentations.  This incredible software is released this month!

OptionPower 6.0 extends the ease of use and functionality of the system and adds the ability to combine input from different audience response devices, including keypads, smart phones (iPhone & Android devices), and tablets.  The web-based Virtual Base Station Module now supports broadcast of slides and other presentation materials along with tabulated polling results in real time.  Other enhancements include new display screens and new reports and polling slides in the Council Voting and Decision Support Modules.

This is the most powerful and reliable version of OptionPower to date. We have migrated to the latest versions of Windows and Office and added more features to all seven Add-On Modules. You will love the power, flexibility and user-friendliness of this release.

Learn something? Share it so others can benefit too!

How Can We Help?

Give Us A Call Today!